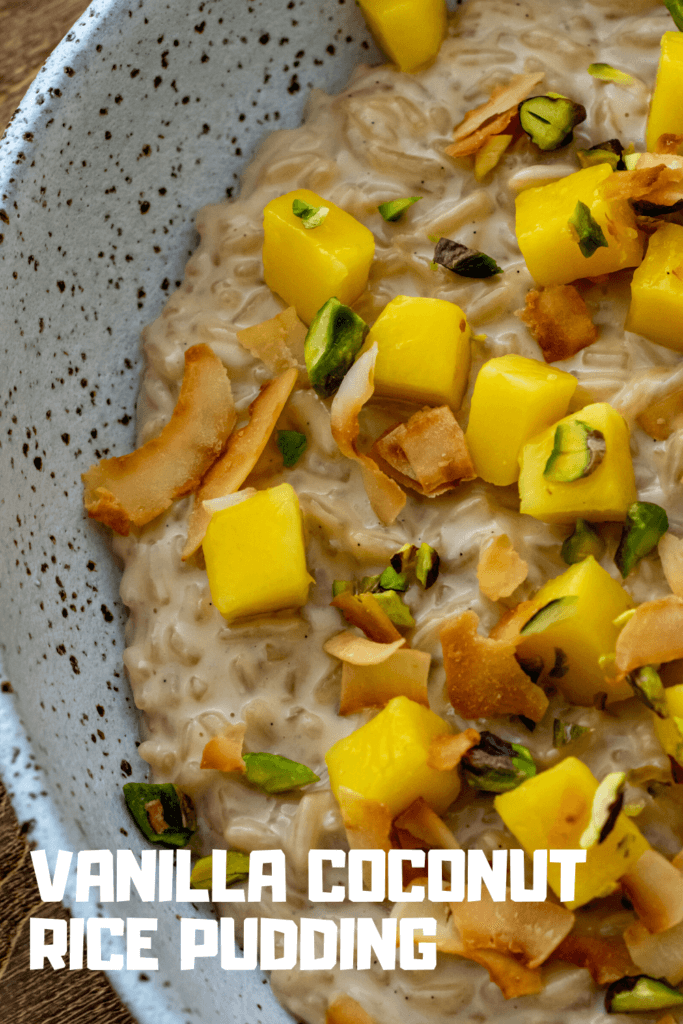 Rice pudding is an old school classic.  Definitely was one of my favorite desserts growing up.  I guess for a lot of people it's a love/hate relationship.  Growing up having sloppy over/undercooked pudding served over and over again in rural Ireland (just like porridge for brekkie!) or at the school canteen for dessert.  There is no denying it rice pudding can be simply awful but this vanilla coconut rice pudding with the addition of fresh mango & pistachios is certainly not one to turn your nose up at.

WHAT IS RICE PUDDING

Rice pudding or arroz con leche as it's known in spain or sweet rice porridge as known in Asia.  There are many different ways to make it and different types of rice that can be used - of which I will talk about later.  Some recipes call for milk, some cream, some water and even eggs have been known to be used.  Although I'm not seeing where and why it's necessary.  Being from Ireland I'll talk a little bit about what I know and consider rice pudding to be.

Quite simple it's a dessert made using rice.  It was traditionally made in 2 ways.  1. Where all the ingredients are placed in a pan over a low-medium heat and someone stood stirring and stirring and stirring.  Sounds painful but it was either this or wash the dishes - I would choose this any day!  Secondly which I guess is a little less labour intensive was to place the ingredients in a baking tray, give it a stir and cook it on a low temp in the oven whilst eating dinner.  Pros = you can just leave it alone. Cons = having to do the dishes!!

As time went on and microwaves were introduced people often used them to cook the pudding.  I always found that this was more of a pain the ass than not.  Hot milk & rice spilling over the side.  Constant trips to and from the microwave to give it a stir and YEP having to do the dishes was still on the cards!

So for this vanilla coconut rice pudding recipe I went the traditional stirring route but using somewhat nontraditional ingredients.

WHAT RICE CAN I USE?

Truthfully most rice can be used to make rice pudding.  I would probably steer clear of instant or par boiled rice though.  They won't absorb the liquid as well as uncooked rice and in order to make the PERFECT creamy rice pudding it's about taking time and allowing the grains to soak up all the liquid. 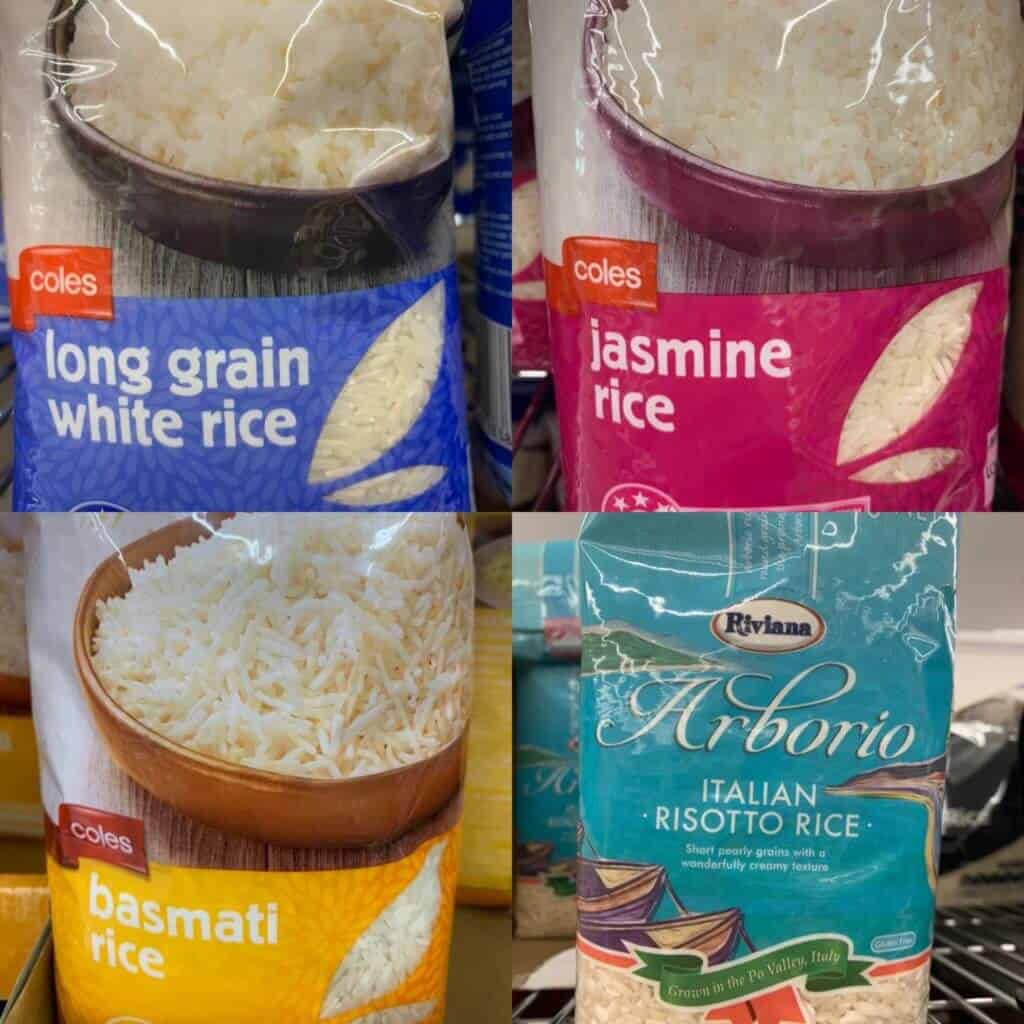 a long grain rice produced mainly in India but also in the Himalayas and Pakistan.  It has a slight nuttiness to it and offers floral notes too.  It comes in both brown and white but I would probably stick with using the white version for this dish.

another long grain rice and in my opinion probably the best option to use for making this recipe (hence me using it!).  Grown mainly in Asian regions like Vietnam, Thailand, Cambodia.  It too has a nutty taste but it isn't as fragrant as basmati.  There is a higher starch content in jasmine rice too.

the king of rice in Italy.  Typically we think of risotto when we talk about Arborio rice but in Ireland growing up you used to be able to buy "pudding rice" - you probably still can but I can't check as I live in Australia these days.  Pudding rice was Italian japonica broken rice - essentially Arborio rice.  The grains are shorter, thicker and starchier.  Which in turn makes for a thicker more stick to your sides pudding.  PERFECT for the colder, wetter Irish days.

also known as japonica rice or sushi rice.  It is once again a short grain rice that contains more starch than long grain rice and also is stickier too.  Like Arborio it works well but due to the higher starch levels it's thicker and heavier.

is a type of rice with yes longer grains.  Basmati & Jasmine fall into this category but usually we think of American rice when we talk about "regular long grain".  It has a good amount of starch (balanced is what one might say wine tasting!!) and is fluffy once cooked making it another ideal suitor for rice pudding.

Standard ingredients used in making rice pudding are rice, milk & sugar with additions such as vanilla, cream, nutmeg and cinnamon too.  Here is what I used to create the perfect vanilla coconut rice pudding 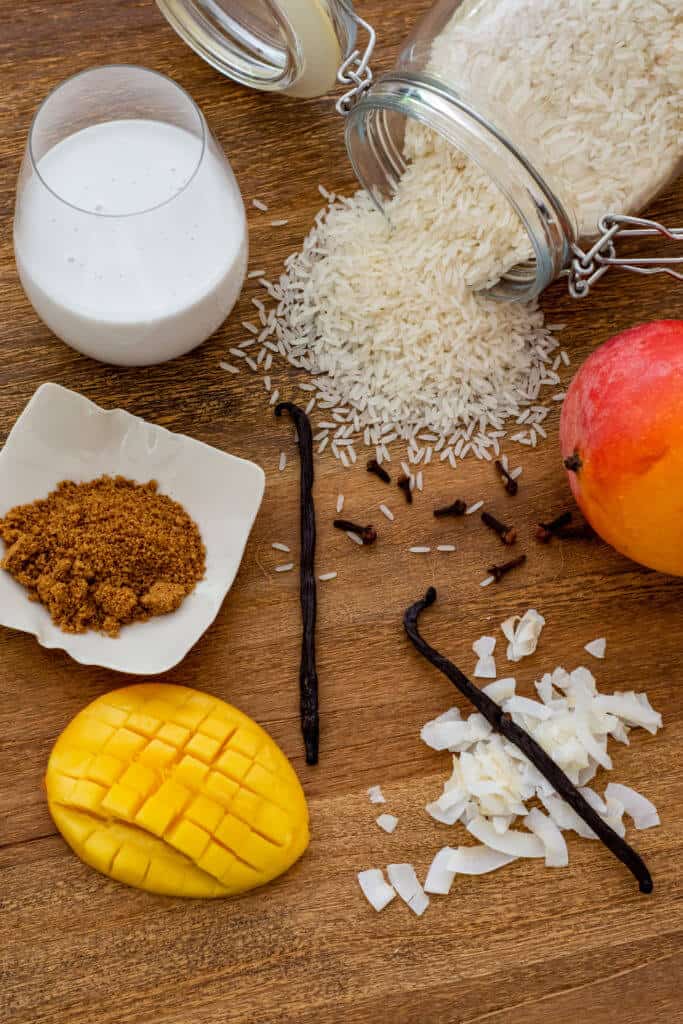 seeing as we are putting an Asian twist on it I figured best stick with the rice commonly grown in Asia and the fact that long grain is (in my opinion) the best choice.

it wouldn't be coconut rice pudding without coconut now would it?  The difference between coconut milk/cream is the cream is thicker.  Cream is made from 4 parts shredded coconut to 1 part water where as coconut milk is well - read on!!!

I love these guys.  The quality that I am getting from Slo Food Group is unreal.  Rich and deep in flavour, often described as "bourbon vanilla" these guys are the classic bean found in most desserts like icing, ice cream, flans & extracts.  There is no denying the quality and the delicious taste these little black dots bring to the rice pudding.  Don't forget to chuck in the whole pod once you have scraped the seeds.  Don't wanna let any you have left behind go to waste.

once the coconut has been shredded it is dried for longer storage.  It comes in 2 forms - sweetened and unsweeetened.  I prefer the sweetened version which has been hit with some confectionary sugar.  One is with rice pudding is it often lacks texture so to add a little to it and keeping up the coconut theme I have toasted off a bit of shredded coconut to sprinkle on top.

healthy & tasty these little green/purple fellas are a good source of protein and fiber.  Adding great texture to the dish they also add a beautiful pop of colour.  Chop/crush lightly and sprinkle on top - simples!

in season now in Australia and also very popular in Asian cusine.  I have simple just chopped up a ripe mango and sprinkled it on top.  You could be extra fancy and make a mango puree and drizzle it over but i like the bite and aesthetics little cubes give.  Read up more on mango varieties and benefits in my Mango Chili Chutney post.

it wouldn't be a dessert without some form of sweetener, would it?  Castor sugar is typically the sugar of choice but I've gone with palm sugar for this recipe trying to keep it authentic.  It is a natural sugar and derives from palm trees.  The colour is often a little browner so it makes the vanilla coconut rice pudding dish a touch darker.  Palm sugar is typically not as sweet as refined white sugars so you often need to add more when using it for desserts.  I feel with the natural sugars in coconut cream it is all well balanced.

using cracking Sri Lankan whole cloves once again from Slo Food Group these guys are sweet, spicy and somewhat bitter too.  I only used 1 in the recipe as the power of clove is strong so we don't want it to take over.

as mentioned above coconut cream is a ratio of 4:1 where as coconut milk which is similar in consistency to cows milk is 1:1 shredded coconut/water.  Milk can be used instead but well it is vanilla COCONUT rice pudding.

just a pinch. Salt is used in every step of cooking, that is unless you are palate-less!  Even just a tiny amount can help lift and balance out many dishes.

Here are a few cracking recipes that fellow food bloggers have put together.  All a little different but have great merit in their own right.  If you don't love the sound of Vanilla Coconut Rice Pudding then be sure to give one or two of these a try!

This beef cheek ragu recipe is a real winner with everyone, well except vegetarians - sorry!  The time and love that needs to be put into this dish might seem a little intimidating at first but the final outcome is TOTALLY worth it.  Truthfully though, once the prep is done the beef cheeks just need...

END_OF_DOCUMENT_TOKEN_TO_BE_REPLACED

This week and to be honest quite a few times recently we have enjoyed this delicious pork & creamed spinach dish.  On the table, in 30 minutes and the look of a restaurant-quality dish, there is no wonder we are eating it again tonight!! I have been getting some delicious pork tenderloin from my boy...

END_OF_DOCUMENT_TOKEN_TO_BE_REPLACED 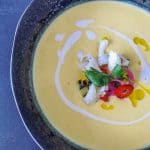 The other day I posted my watermelon & togaroshi recipe and I talked about clinging on to summer here in QLD and how summer is coming elsewhere in the world.  Well, now at the request of my wife (who is always cold) I am back making soup!  This coconut corn soup has been a family...