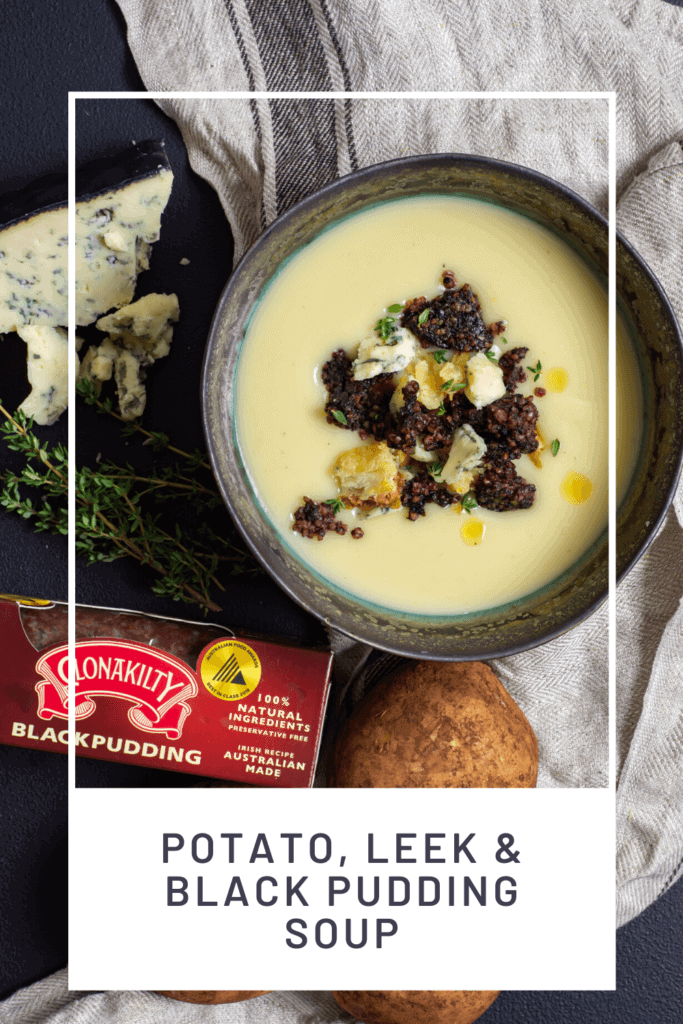 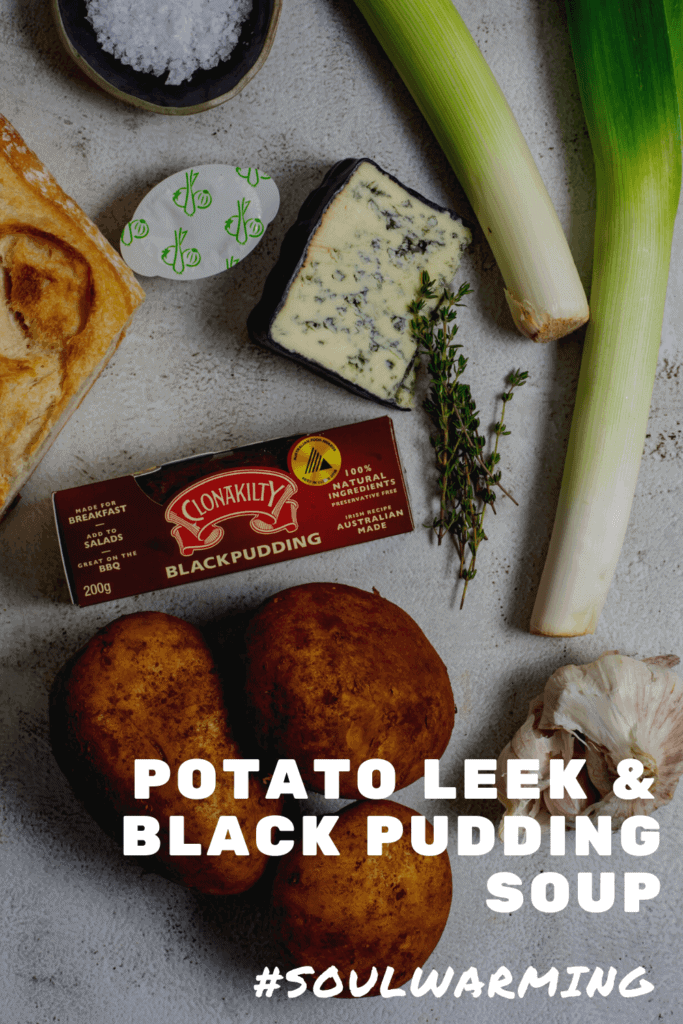 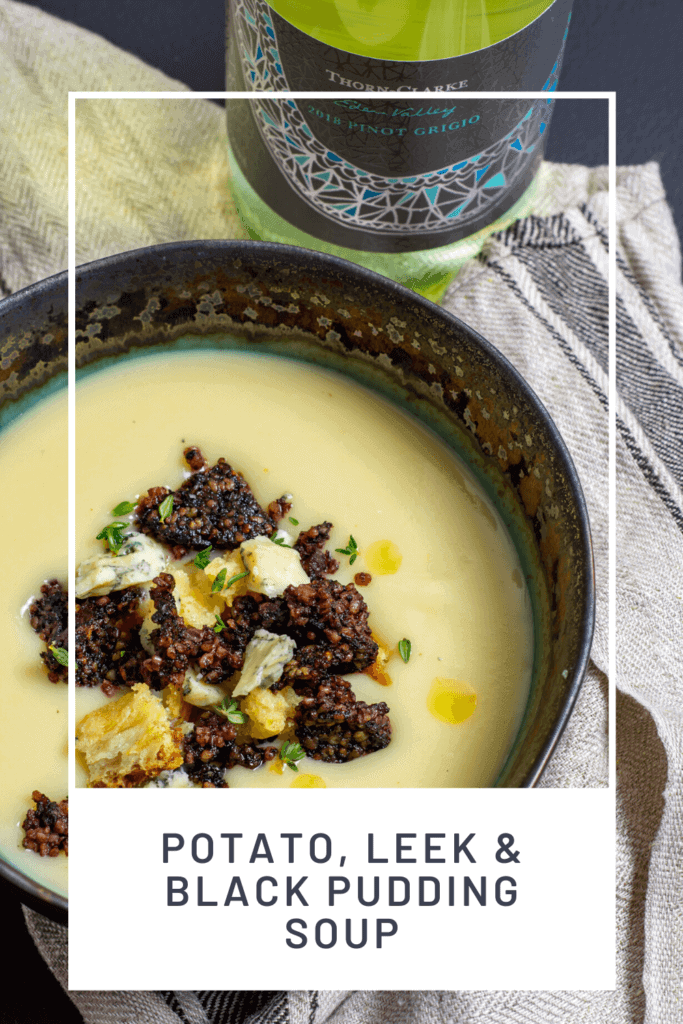 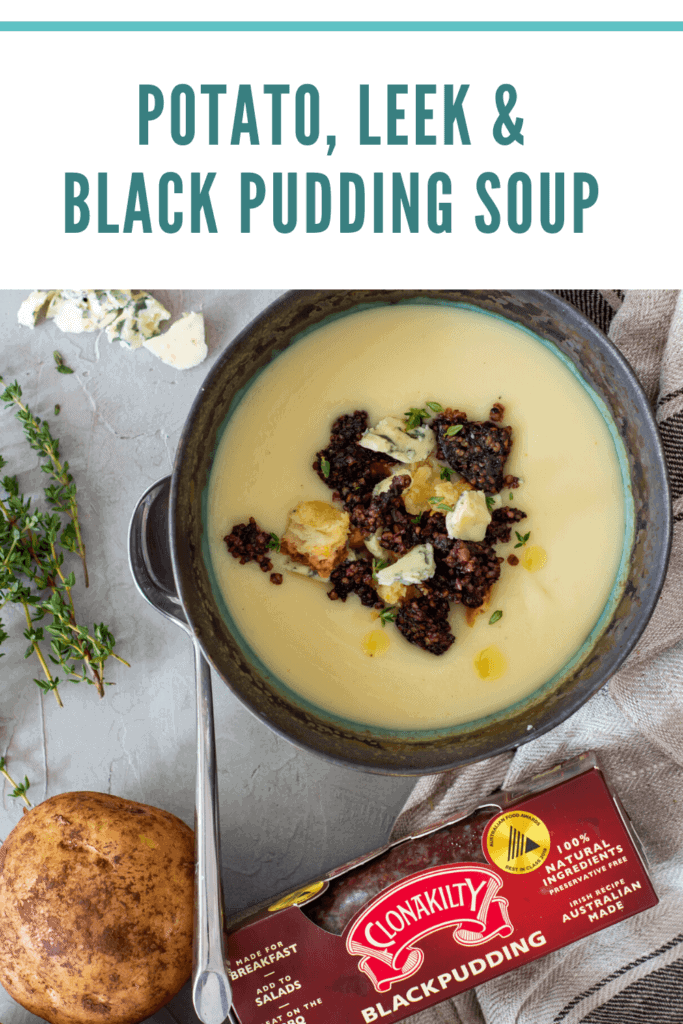 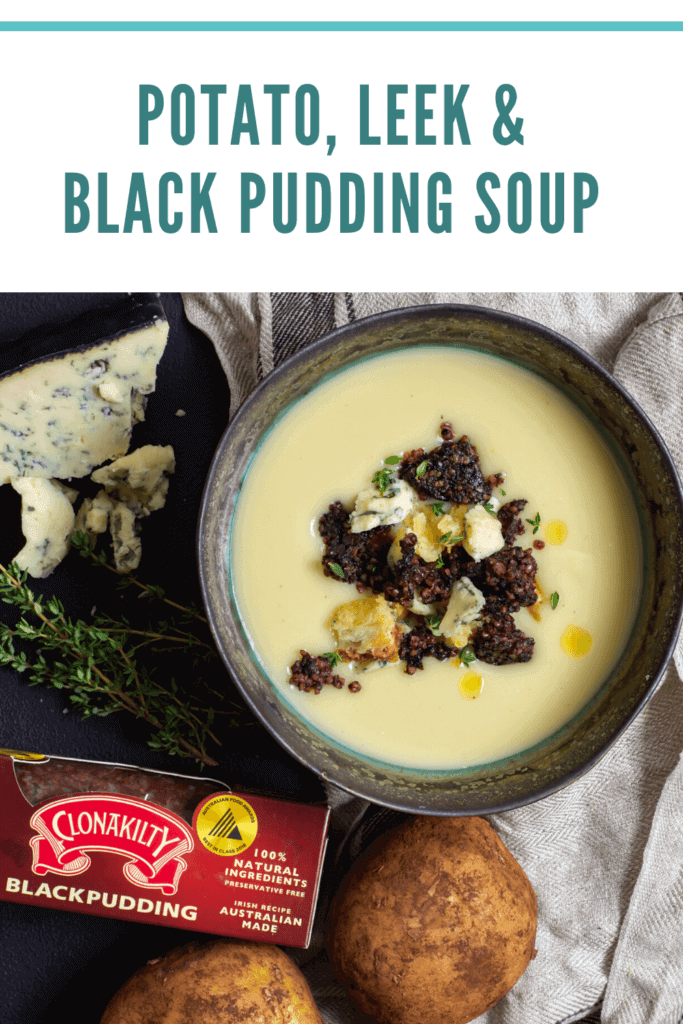 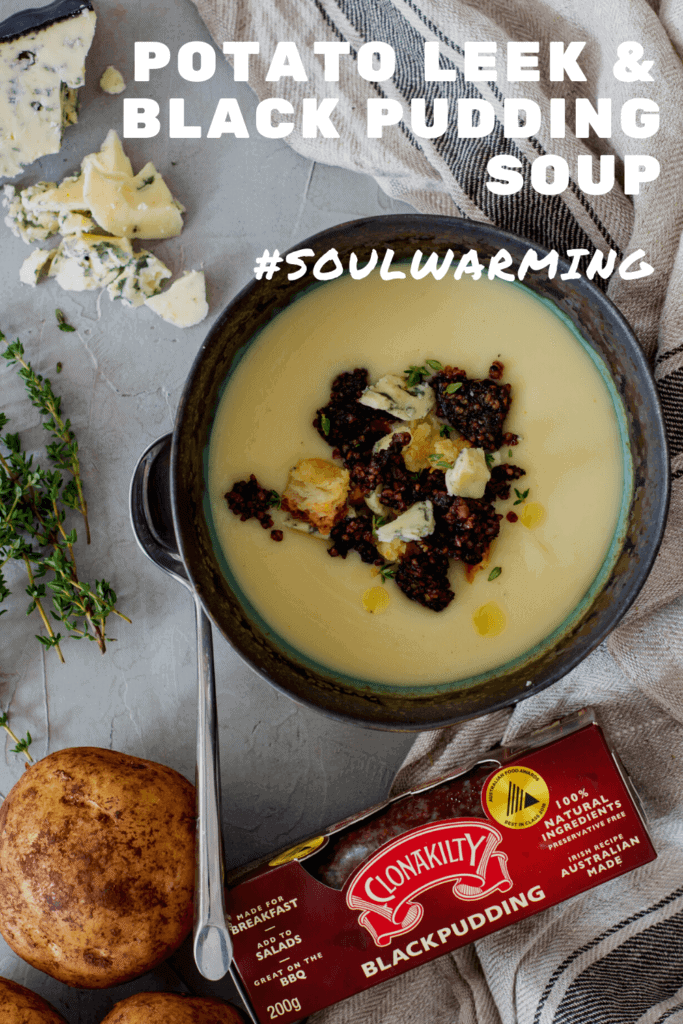 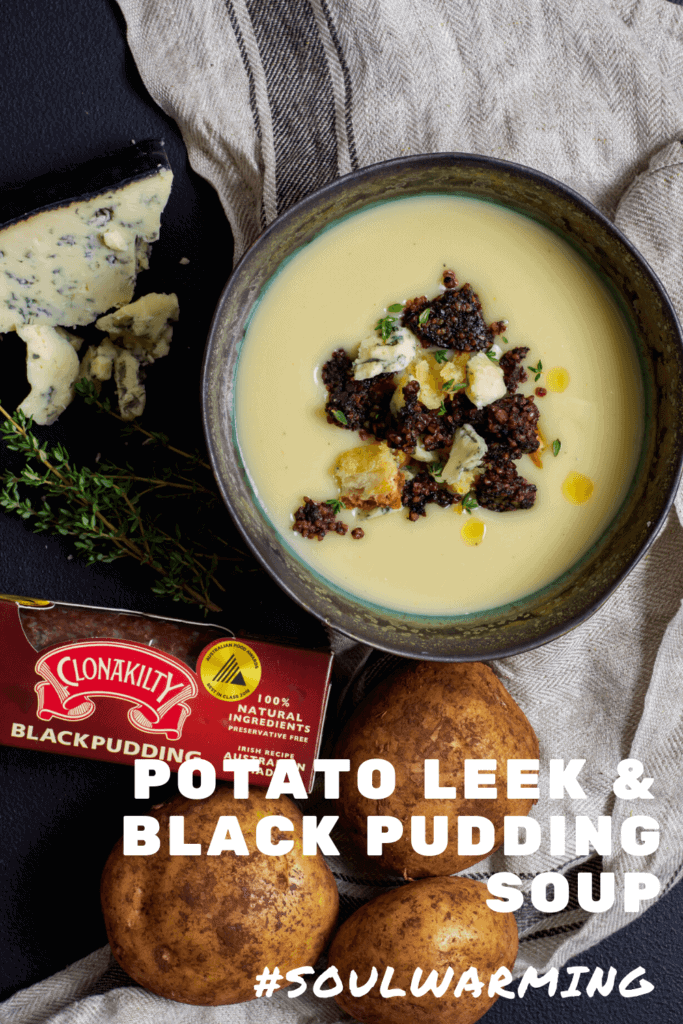 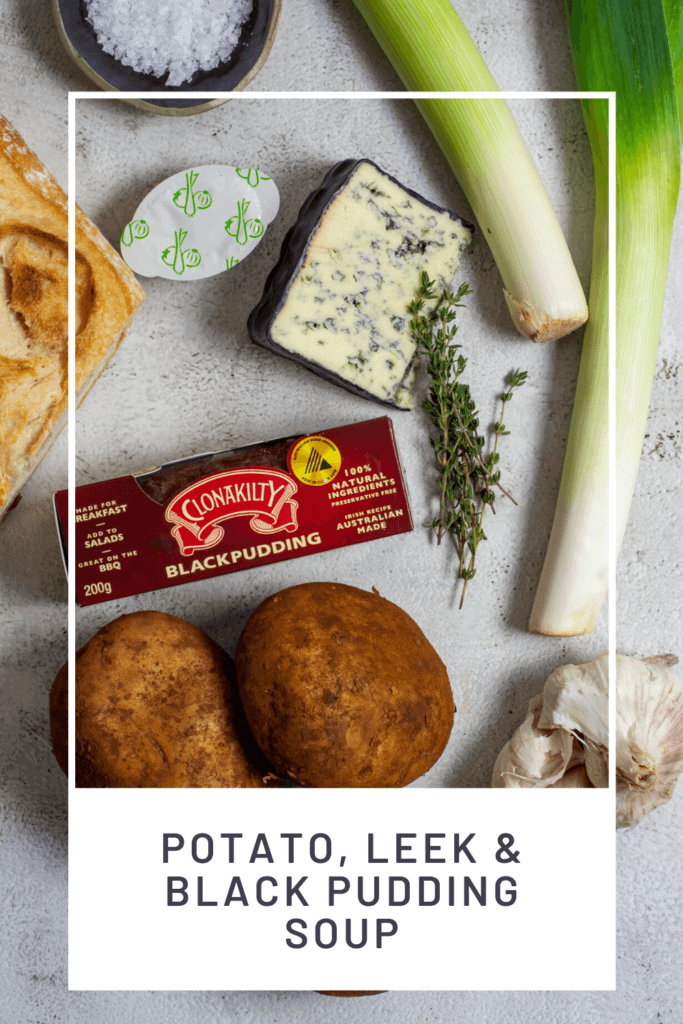 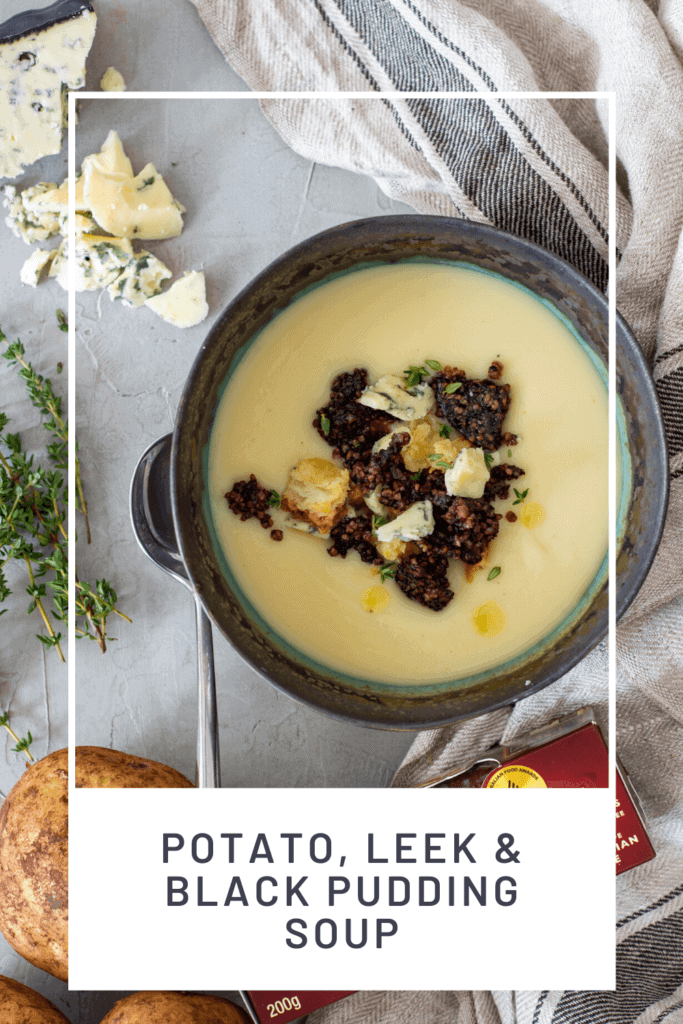 Did I mention it's a whole lot colder now in Australia?  Monday marked the 1st day of winter here, and I've definitely gotten too used to the warm QLD weather.  Low teens weather has me putting the heating on and wanting to curl up with a big ole bowl of potato, leek & black pudding soup.  What I love about this dish is how much it reminds me of home.  Growing up, potato & leek soup was always on the menu.  Black pudding was always mandatory at breakfast, and bread was ESSENTIAL.  So, with that in mind, I've combined all of those together, thrown in some delish blue cheese, and made a whopper of a soup to warm the soul. 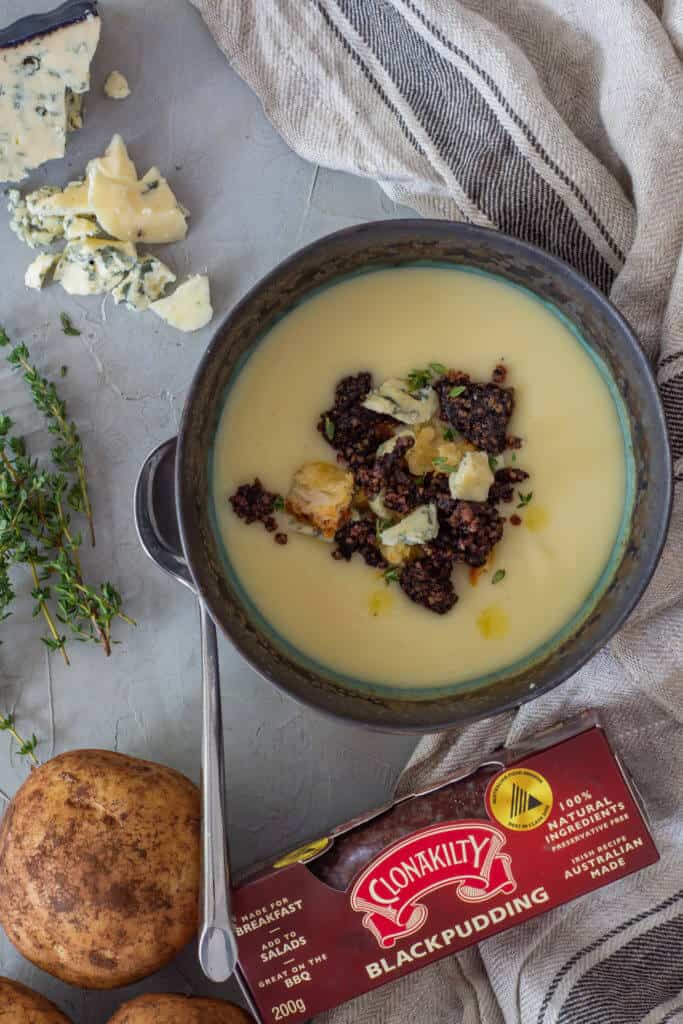 THE BASIS OF SOUP

Making soup is one of my favourite things to do.  When I lived in Ireland, I would pretty much make it weekly, and then in winter in NYC, I made it twice a week.  So many flavour combinations to be had, and to me, the best part is the toppings!  More about that later.  Here is what you need to start making any simple soup.

The beginning of pretty much all soups.  FYI, I used leeks in this recipe.  I know, I know confusing, BUT they are from the onion family, so I didn't wanna overload the soup with onion flavour!  Dice the onion and sweat it down for 4-5 minutes in a little butter & oil combo.  Do this on low-medium heat, so you don't brown/burn them.

Yes, it is optional, BUT not in my world!  If the recipe says 1 clove, you can pretty much guarantee yourself I've thrown an extra one in for good measure.  Crush it up and chuck it in with the onion to sweat. Usually, it's not great to add garlic too soon when frying food as it will burn and turn bitter, BUT we are cooking this at a lower heat, so it's just sweating.  Sounds sexy, eh!

Is it soup without veggies?  Technically yep - search cream of chicken soup, but 99% of all soup recipes will contain vegetables.  At this point, to make a simple soup, I would add the vegetables in.  Allow them to cook off a little in the pan and then chuck in the stock.  There are defo "fancier" ways to make soup like slow-roasting tomatoes in the oven first to bring out the natural sugars and flavour or smoking some squash on your BBQ.  But let's keep this to the basics for now. 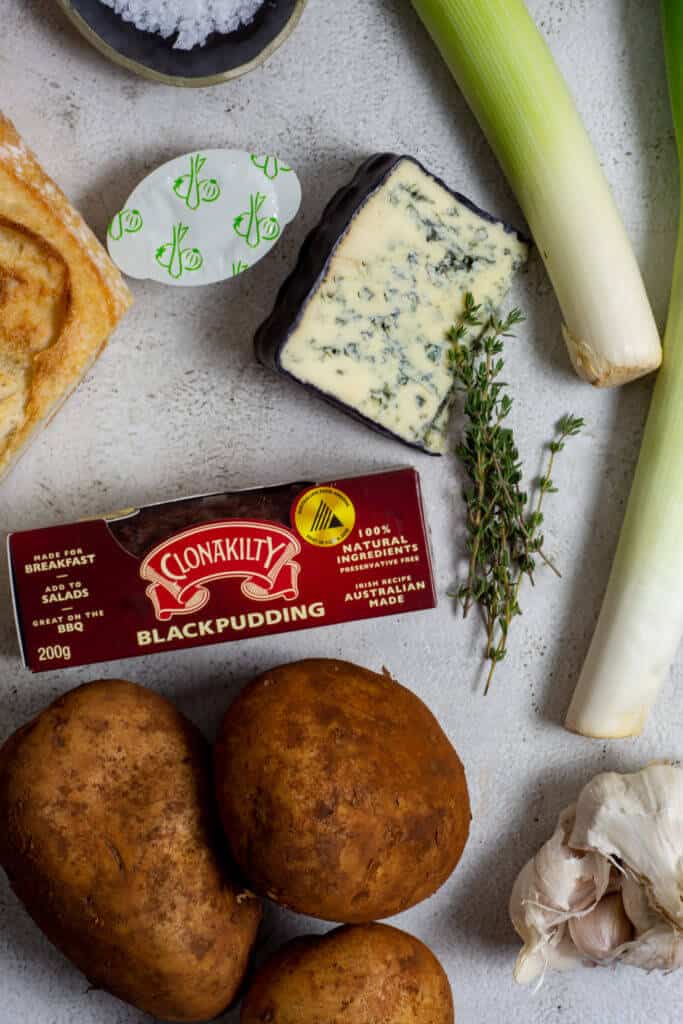 I like to add a little salt in my soup at the same time as the vegetables, but I also finish with salt when blending it up.  I find that it's better to taste and adjust as you go rather than just chucking it all in at the beginning.

A great way to add depth of flavour, spice, and brightness to your soup too.  Things like ginger, chili, cayenne, paprika can all add heat to your soup.  These can all be added at the same time as the vegetables.

You have hard herbs like thyme & rosemary or soft herbs like parsley, coriander, or basil.  Hard herbs are added early on in the process as they will stand up to the heat better and part tons of background flavour.  Soft herbs will turn brown and lose flavour as they cook, so things like coriander & basil are added in when blending to bring brightness to the soup.

It wouldn't be soup without a form of liquid, would it?  Vegetable stock is usually my stock of choice.  That way, if you have any vegetarian guests coming for dinner, your soup is suitable for them too.  I like to add meat in the form of toppings! 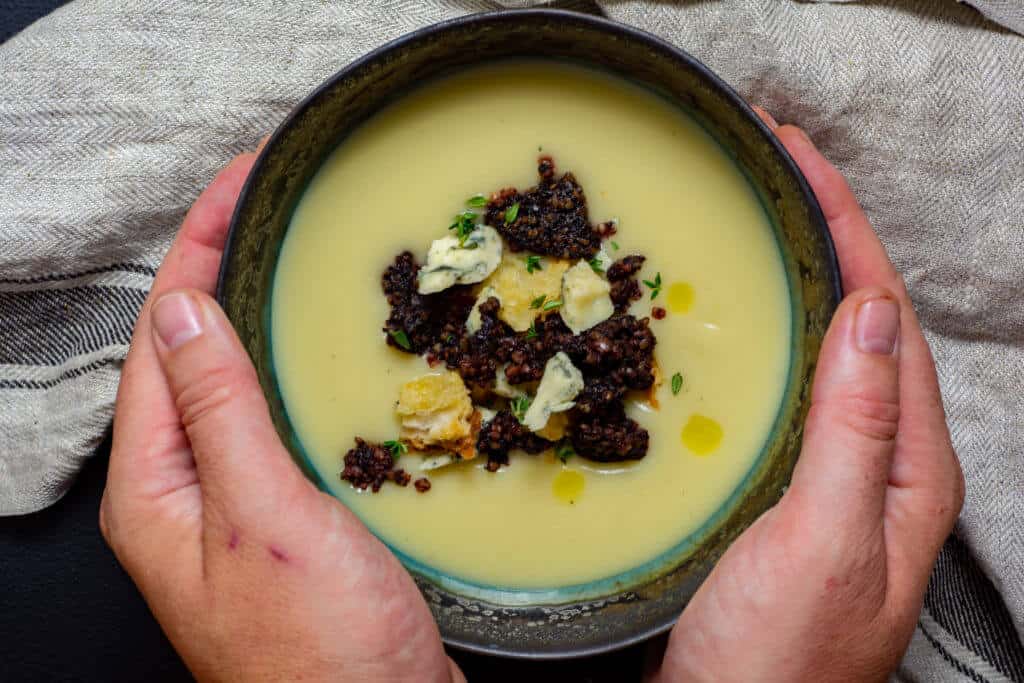 This is where your soup can go from zero to hero in a matter of seconds!  Soup is well its soup. Don't get me wrong I love a good old bowl of soup on a cold day, but where is the texture, and where is the pop of excitement coming from?  With this soup, I added some crispy garlic croutons, creamy blue cheese, and some of the amazing Clonakilty black pudding.  Fried up til it's nice and crisp, it turns this soup up about 100 notches.  The great thing with the addition of the black pudding is that it can make the soup filling enough as a main course too.

The other beauty about adding toppings to the soup is you can add other little pops of flavour like pickled chili for a little kick, bacon for a bit of fat, fresh herbs for well, freshness!  You can even get extra fancy and add some vegetables to the bottom of the bowl and pour the soup tableside.  You know, pretend you are Gordon Ramsay for a second 😉

What I also love about the toppings is it makes the soup a GREAT dish to serve at a dinner party.  The soup is cooked in advance, so you don't need to dance around the kitchen when guests arrive.  Plus, you can sexy the hell out of the soup with a few extra touches.  In the case of this wonderful potato, leek & black pudding soup, it took 5 minutes to fry the pudding, and that's it.  Easy clean up, maximum taste, and it looks the business too.  Roll on the wine 😉

This may seem OBVIOUS, but leeks contain a heck of a lot of dirt.  To me, the simplest way to clean leeks is - using a sharp knife, cut the harder greener ends off, and set aside.  Great for making stock with!  Slice the leek in half lengthways and rinse under cold water, make sure you rub in between each layer to remove any dirt or grit. Don't worry if some of the leeks break up; after all, you are using it in soup, so it doesn't matter too much what it looks like 🙂 Once cleaned, cut the root off and slice that bad boy up!

HOW TO MAKE GARLIC CROUTONS 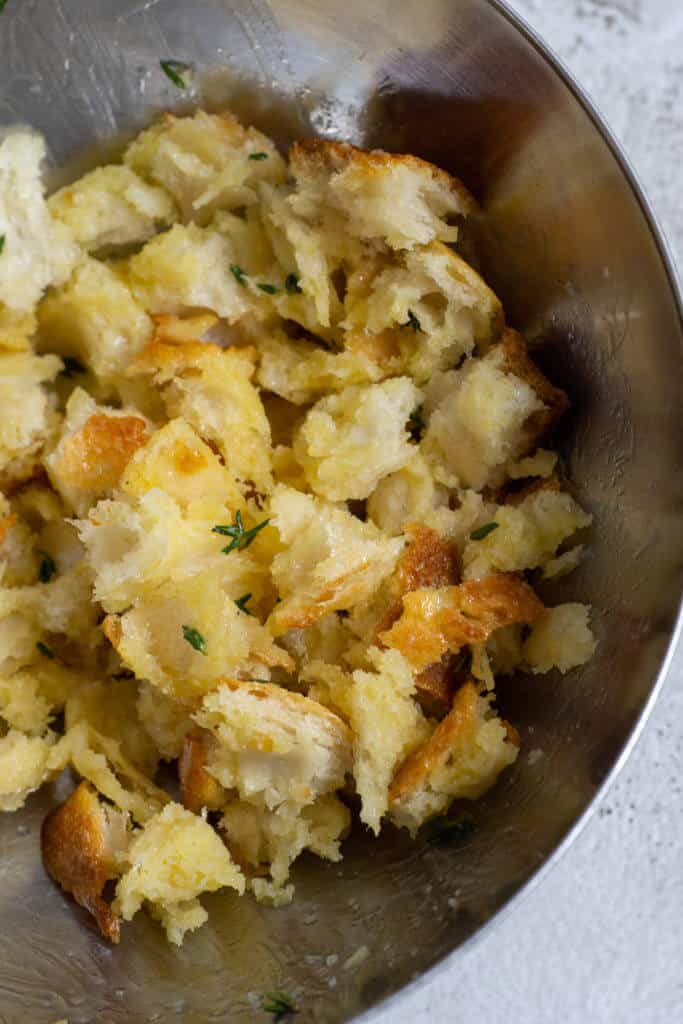 Simples.  I like to tear up the bread. It's soup, after all, let's make it a little rustic.  Get an old loaf of sourdough or something similar and tear about 100-200g up into bite-sized pieces.  Simply toss them in some olive oil, melted butter, and add any spices or herbs you want to.  I sprinkled a little garlic powder, and thyme leaves on them as we were using thyme in the soup.  Popped them in the oven @ 180c for 10 minutes and then allow them to cool.  Croutons will keep for about a week in an airtight container, so maybe whip up a caesar salad later in the week too!  Another component that can be made in advance and a great way to use up old bread too. 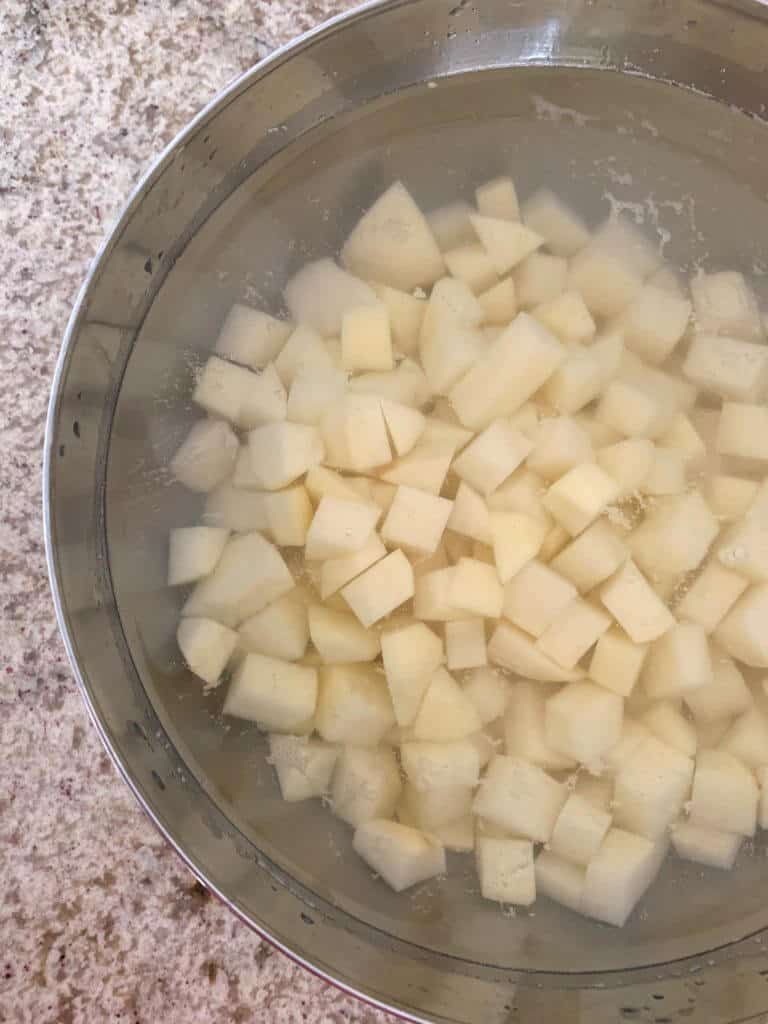 Once potatoes have been peeled and cut, the flesh has been exposed to oxygen.  This will turn the flesh brown quickly.  Seeing as the best way to succeed in the kitchen is to have all your ingredients laid out and ready to go, it's advisable to store peeled potatoes in cold water until ready to use.  This slows down the oxidation leaving you with the creamy white colour potato we all know and love #toptip

WHAT IS BLACK PUDDING

The big Q!!  To me, it's heaven.  Hailed as a superfood as it's rich in iron and protein.  It is packed with onion, spices, oatmeal or barley, and of course, blood.  It sounds SUPER daunting at first when you read about it, but believe me when done right there is an excellent balance of flavour, and you get an almost sweetness to it when caramelised correctly.

Ireland's BEST black pudding - Clonakilty, made using the same recipe since the late 1800s.  It uses good wholesome ingredients found in local farms.  In my opinion, it probably contains a higher % of oatmeal than other puddings or boudin noir I have had, but this to me is what makes it so good.  It crisps up beautifully, helping to add great texture to the potato, leek & black pudding soup.  Now available in Woolworths all over Australia, it's defo one to grab and try.  Heck, you got this far you may as well make the whole recipe 😉 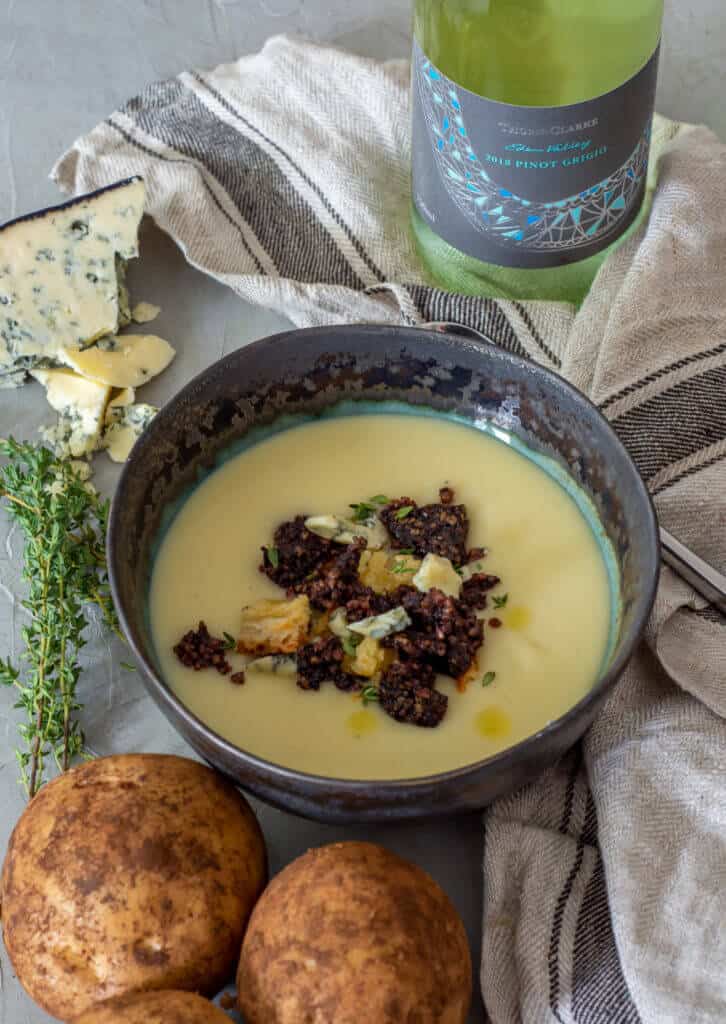 I know it's colder and we are eating a bowl of hearty soup potato leek & black pudding soup, but the wife doesn't drink red!! To be honest, though, the soup needed something a little more delicate to sit alongside it and not take center stage.  Truthfully, I'm often not the biggest pinot grigio fan.  I guess, too many cheap assed ones in restaurants in Ireland or at functions that left me with nasty hangovers!  BUT, I may have just turned a corner with the Thorn-Clarke pinot grigio from Eden Valley.  Mrs. AnotherFoodBlogger doesn't usually drink mid-week, but one sip of this, and she was grabbing a glass from the cupboard!

I got flavours of pear, peach (as it opened up), ginger, and bay on the nose.  The palate offered more pear (yum), some lime zest, apple, and ginger once again. It's super refreshing with enough going on to stand up to the bold flavours of blue cheese and black pudding. My description of this was "it's not your avg pinot grigio" and this soup DEFO isn't your average soup, so a match made in heaven!  Why not head to Wine Direct and pick this beauty up in this special DEAL.

If this recipe inspires you to whip up some soup (or drink some damn good pinot grigio!), then check out these other recipes for further inspo. 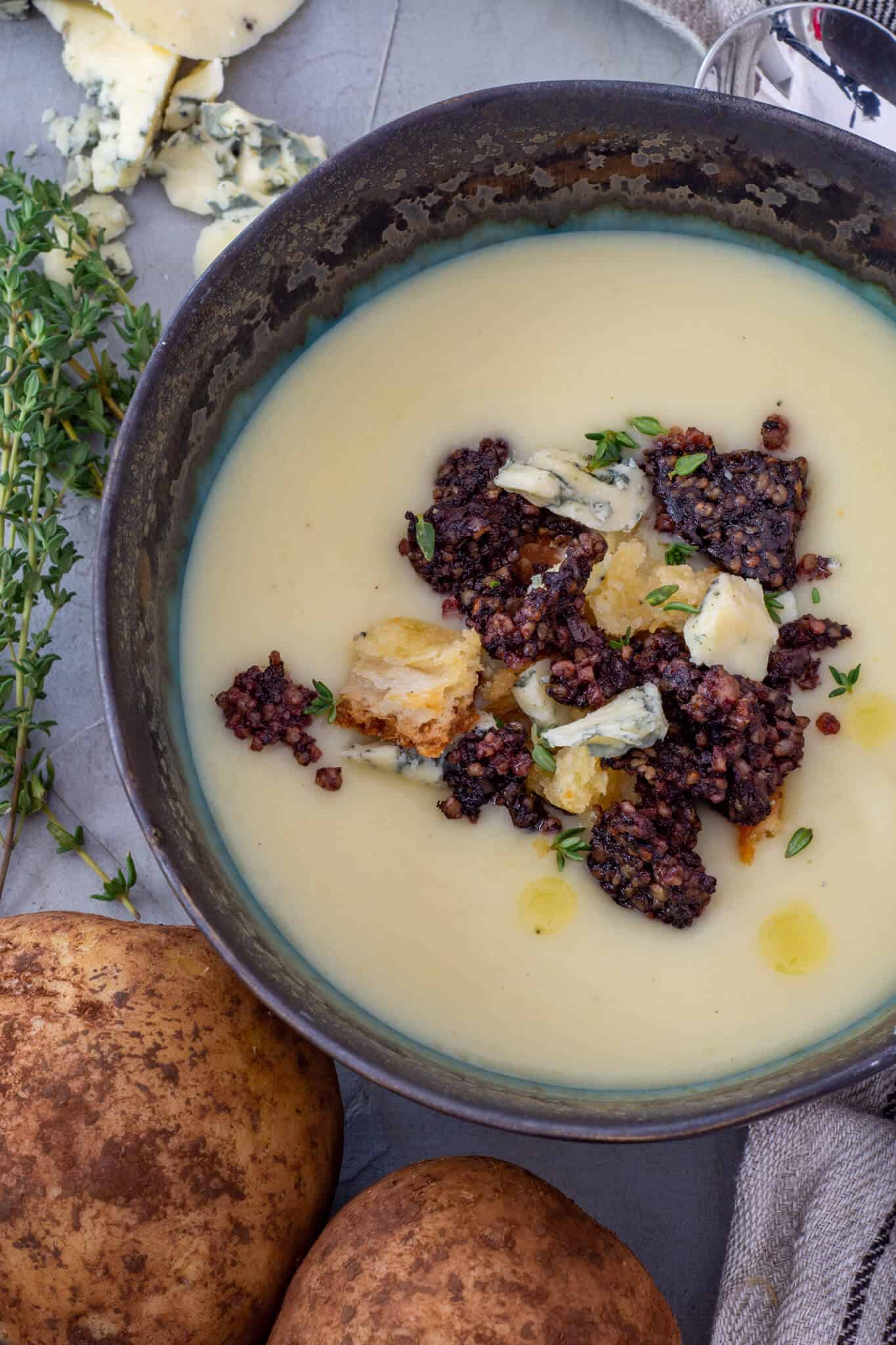 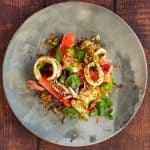 Summer is here and although Brisbane might be in a mini lockdown it won't stop me from cooking and eating good food. Not to mention great wine too! This week I was trying to be good (read leave extra calories for the wine!) so I whipped up a delicious grilled squid salad with juicy watermelon...

END_OF_DOCUMENT_TOKEN_TO_BE_REPLACED 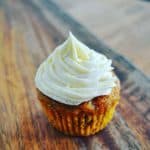 Carrot cake - by far my preferred cake of choice.  C'mon think about it, you get to have something sweet AND one of your 5 a day veggies. WIN WIN!!!  And, lets not forget about the vanilla cream cheese frosting................... My wife and mine dessert choices differ greatly.  She is all about the chocolate,...

END_OF_DOCUMENT_TOKEN_TO_BE_REPLACED 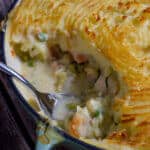 A big old bowl of comfortable.  That's prob the simplest and best way to describe this gourmet fish pie.  It's got the elegance level to be served at a dinner party but you can't beat this, the couch, a glass of wine, and your favourite TV show.  There has been a lot of that lately...